As Black History Month comes to a close, we celebrate the APS student alumni who have decided to attend an HBCU to witness the historical and cultural impact of these historical institutions of higher education for themselves. These students leave behind a great legacy at APS and serve as inspirations for other students who are at the pivotal point in their life when they begin to explore their post-secondary options.

African American students decide to attend HBCUs for many reasons, but one of the most common reasons for many of them is they want to learn in a safe space where they feel they belong and are able to connect with others like them. For many of these graduates, their greatness has yet to be revealed, but they are on the path to achieving greatness and opening doors that were once closed for them so that others like them are able to walk through them.

One of the unspoken founding principles of HBCUs was W.E.B. Du Bois’ belief that it was the responsibility of the talented tenth of African Americans who became educated to return to their communities to help others and affect societal change. The education received at HBCUs prepares students to lead, as witnessed by Vice President Kamala Harris who attended Howard University, and make the world a better place by studying the faults of the past so we as a society can make improvements  and course corrections for our future. In a generation when many HBCU graduates are still the first generation in their family to graduate from college, let’s honor these APS student alumni and celebrate their monumental accomplishment. They, along with other APS alumni, are our future leaders of tomorrow! 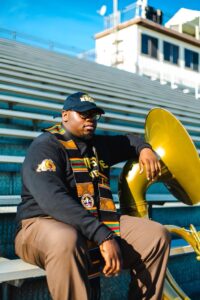 APS High School Attended: Washington-Liberty High School – Class of 2014
HBCU Attended: Bowie State University – Class of 2019
Major: Music Technology
Why did you choose to attend an HBCU?
I attended Bowie State University to experience the HBCU culture. My overall HBCU experience was simply amazing. I gain so much knowledge about my HBCU and learn so much about myself as a man. Currently, I’m a first year special education teacher going for my certification. I’m also the sousaphone player for the six time Wammie Nominted band called The Kontrolled Khaos. The DMV based Kontrolled Khaos Band is a powerhouse super-group consisting of 8 prominent vocalists, producers, and musicians along with many other musical collaborators. Kontrolled Khaos was established on January 23rd, 2017 by leader, drummer, and visionary Jonathan “Footz” Livas. Footz initially dreamt of gathering artists for a project. However, the dream turned out to be much broader. With a unique genre, Kontrolled Khaos categorizes themselves with a sound known as ‘Garage Soul’, it has propelled the band to work with numerous artists such as Goldlink, Lightshow, and more. No matter how big or small the venue Kontrolled Khaos brings a crowd and creates a sound that empowers, inspires, and moves every individual within their reach. With their debut studio album entitled ‘Let Love’ on the way July 31st, 2020, Kontrolled Khaos intends to add to their impressive resume which includes performances at DC Jazz Fest, Takoma Tavern Station, The Fillmore in Silver Spring, and many other venues across the US East Coast. Kontrolled Khaos is committed to mastering their crafts, working in a spirit of excellence and providing others with a life changing experience. 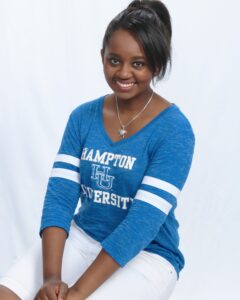 APS High School Attended: Wakefield High School – Class of 2012
HBCU Attended: Hampton University – Class of 2016
Major: Biological Sciences
Why did you choose to attend an HBCU?
I loved my experience in high school, being around so many unique voices, all with such unique perspectives. And so, when I was choosing a university, I wanted to continue to expose myself to unique cultural experiences. There is this false narrative regarding the African American community, where it’s perceived to be a monolith without the “diversity” that can be found in more mainstream institutions. However, to have attended an Historically Black College is to have immersed yourself into a diaspora that is one of the richest on the planet. It’s to form connections with individuals from all walks of life from across the globe all connected by this one black strand that ties you all together. I attended an HBCU because I wanted to be surrounded every day by Black success. I attended an HBCU because I wanted to be lifted up and to lift up my community as I sought to achieve my wildest dreams. 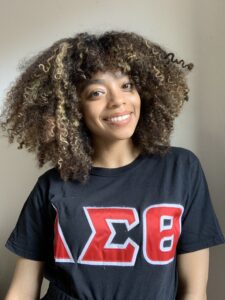 APS High School Attended: Washington-Liberty High School – Class of 2014
HBCU Attended: Hampton University – Class of 2018
Major: Political Science and Pre-Law
What advice do you have for students wanting to attend an HBCU?
I absolutely LOVED my experience at Hampton University, it truly shaped me into the woman that I am today.  To be around black culture for four years was a dream come true! I pledged Delta Sigma Theta Sorority, Inc., made life-long friendships and became the Senior Co-facilitator of the Student Leadership Training Program. I will forever remember my years at Hampton University, they are a part of who I am. 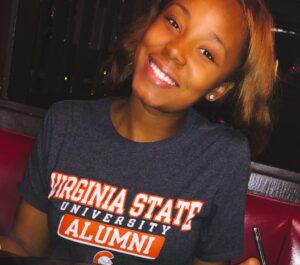 APS School Attended: Wakefield High School – Class of 2012
HBCU Attended: Virginia State University – Class of 2016
What advice do you have for students wanting to attend an HBCU?
I would assure students attending an HBCU to not feed into the notion that they’re aren’t on par with Ivy league and PWI’s. HBCU, unlike the latter, provide an authentic experience for all students that’s rooted in tradition, heritage and a long-lasting legacy for generations to come. They’re a unique connection and pride that students feel to their HBCU’s that leaves an impact felt far beyond their time on campus. Furthermore, through the strong family-oriented foundation built throughout each HBCU’s history. Attending an HBCU will provide you with resources that will be beneficial to you in the long run. Not only will you be prepared for success, you will find the joy in your profession through your journey. After graduating from an HBCU, you will say as most Alumni do, “I Love My HBCU!”