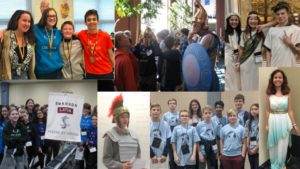 This year’s National Latin Exam awards, by school, are:

In addition to the National Latin Exam, one of the things that makes the APS Latin program successful is the wealth of extracurricular opportunities offered to students. This year was no exception, with Arlington’s Latin students choosing to participate in—and earning awards in—numerous optional contests and events at the local, state, and national level: evidence of their true engagement with the subject. Here is a year-in-review look at their achievements.

Latin doesn’t only mean taking exams! In November, 132 APS students attended the Virginia Junior Classical League (VJCL) two-day convention in Richmond. They joined 1,400 other Latin and Greek students from all over Virginia for a two-day extravaganza of academic, oratorical, literary, costume, and art competitions. They also attended lectures and demonstrations on classical topics, and enjoyed a banquet, disco, karaoke, and a talent show. Arlington students earned 75 top five awards on their convention tests and projects.

At the VJCL Convention this year, two Arlington students were elected as state officers in the Virginia Junior Classical league. Savvy Thompson from Washington-Liberty now serves as VJCL President, and Jack Purple from Yorktown is 1st Vice President. These state officers are responsible for organizing state-wide events such as convention and certamen, and supporting Latin clubs throughout Virginia. Both students have also represented Virginia at the National Junior Classical League convention.

While many school-based celebrations were not able to happen this spring, the annual APS Latin festival, hosted by Yorktown High School’s Junior Classical League, happened in January. This year, over 150 Latin students from every APS middle and high school, many bringing friends and family, celebrated Agonalia, an ancient Roman new year festival. They enjoyed a potluck banquet, Roman games, gladiatorial combat, arts and crafts, and fortune telling. Clothing donations were organized by our VJCL Latin club members. This is always a wonderful event for students, parents and community members to share an evening of Roman culture and food.

Congratulations to all our students! We know you will achieve great things in the future, and we hope you will continue to enjoy Latin!