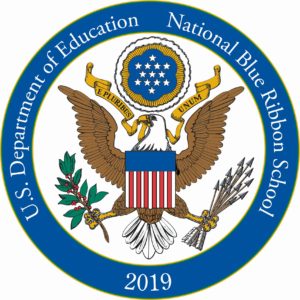 ATS one of 362 Schools Nationwide to Receive the Honor

Arlington Traditional School (ATS) was named a 2019 Blue Ribbon School by the U.S. Department of Education based on its overall academic excellence. ATS is one of only 362 schools nationwide and one of seven public elementary schools in Virginia to receive this prestigious honor.

“We are honored to receive this prestigious national award for the third time,” said Principal Holly Hawthorne. “This achievement is a result of the dedication and hard work of the staff, students and families, the traditional tenets*, the ABCs of Success, and the focus on high achievement for every child. The strong partnerships ATS has forged with families and the community help foster each child’s whole development. Students leave ATS with the skills and attitudes of lifelong learners, prepared to become caring and contributing citizens.”

This is the third time since 2006 that ATS has been recognized as a Blue Ribbon School.

“We are so proud of Arlington Traditional School and congratulate the exemplary staff, students and families for their consistent commitment to excellence,” said Interim Superintendent Cintia Johnson. “This recognition for ATS is the result of hard work and dedication, as well as a commitment to providing all students a safe, caring school environment that’s based on a culture of mutual respect and cooperation. This is one example of the excellence reflected in all Arlington Public Schools.”

Since 1982, the U.S. Department of Education’s National Blue Ribbon Schools Program has honored America’s most successful public and private elementary, middle, and high schools. The National Blue Ribbon Schools award honors schools where students perform at very high levels or where significant improvements are being made in students’ levels of achievement. The award acknowledges and validates the hard work of students, staff members, families, and communities in reaching high levels of student achievement.

The Department recognizes all schools in one of two performance categories, based on all student scores, student subgroup scores and graduation rates:

More information about this year’s Blue Ribbon Schools is available online at https://nationalblueribbonschools.ed.gov.

*The traditional tenets were established by the School Board when the traditional school opened in 1978. They include the following: Teacher-guided instruction in self-contained classrooms; Emphasis on basic education in the core academic areas; Regular homework assigned at all grade levels; Weekly written summary of student progress communicated to parents; Promotion based on grade level mastery; Behavior, dress, and grooming standards; and Weekly assembly programs reinforce philosophy and build community.