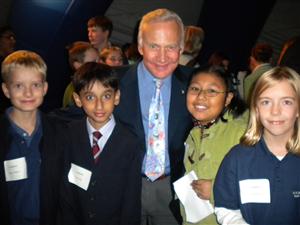 This school year marks the 10th year of Barrett‘s partnership with NASA. Barrett was selected as the first elementary school in Virginia to become a NASA Explorer School, during the 2005-06 school year. The NASA Explorer School (NES) program was designed to support teachers in implementing STEM into the classroom to inspire future explorers, scientists, engineers and technicians.

With funds provided by the NES program, Barrett teachers developed as STEM professionals through opportunities like conferences, such as NSTA & ISTE, working in the field with scientists in Yellowstone, and attending week-long summer trainings at NASA centers around the country. Teachers returned from the professional development sessions excited to share their learning with students and other teachers. After Robotics training at NASA’s Jet Propulsion Laboratory, two Barrett teachers started a robotics program for students that was funded by Barrett’s partnership with Lockheed Martin.

Barrett students have participated in many hands-on/minds-on lessons designed by NASA and Sullivan, with assistance from NASA Education Specialist Rudo Kashiri. For example:

Over the years, Barrett students have won several NASA national competitions, including the Lunar Plant Chamber Design; the Liquid Waste Recycling Design Challenge; Moon Math Competition; Optimus Prime Spinoff Challenge; and the Spaced Out Sports Challenge, focused on Newton’s Laws of Motion. As a result of earning top honors in these challenges, students presented their research at Kennedy Space Center’s Goddard Space Flight Center, and had their projects implemented by astronauts on the Space Station. In addition, students designed experiments that their teachers carried out in reduced gravity on NASA’s “Vomit Comet” near NASA Johnson Space Center in Houston.

Barrett students have also had many unique learning opportunities through being a NASA Explorer School. Just a few examples:

Although funding for conferences and $17,500 for technology and science equipment is only provided for the first three years as a NASA Explorer School, Barrett is still considered active in the NES program. NASA education specialists still work with Sullivan to bring high-quality, engaging lessons into the Discovery Lab. In fact, Barrett is being held up as a model NES in a STEM panel presentation for Congress on Fri, June 10. Recently a principal and three teachers from a school in Montreal, Canada, visited Barrett to learn how to implement Barrett’s Project Discovery and NASA Explorer School program. The Canadian principal wrote,

“We had the tremendous opportunity to do a Study-Visit with K.W. Barrett Elementary School. Principal Dan Redding andJessica Kingsley were very welcoming hosts and the entire staff and student population was overwhelmingly pleasant. Laurie Sullivan gave us an in-depth look at the Project Discovery project through the NES program. We were all fascinated by students’ engagement with Laurie’s outstanding lesson on the Analysis of Sand. Most importantly, we were able to witness Second Language Learners grasp extremely complex concepts during this lesson.”

As we approach the 2016-17 school year, Barrett is looking forward to another fabulous decade of teaching and learning with NASA!