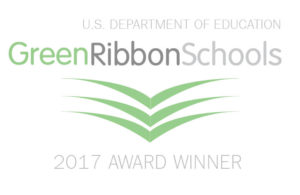 Discovery Elementary School is the largest Net Zero Energy elementary school ever built in the U.S., and the first in the Mid-Atlantic region. Discovery is on track to be LEED Platinum certified by the USGBC. From the earliest stages of project planning, the design team and Arlington Public Schools identified Net Zero Energy as a primary goal for Discovery, so considerations for site footprint, solar orientation, building construction, and energy use were given top priority.

Across the country, 45 schools, nine districts, and nine postsecondary institutions are being honored for their innovative efforts to reduce environmental impact and utility costs, improve health and wellness, and ensure effective sustainability education.

The honorees were named from a pool of candidates nominated by 28 states and the Department of Defense Department of Education Activity. The selectees include 39 public schools, including five magnet schools and one charter school, as well as six nonpublic schools. Forty-four percent of the 2017 honorees serve a disadvantaged student body and 14 percent are rural. The postsecondary honorees include three career and technical and community colleges.