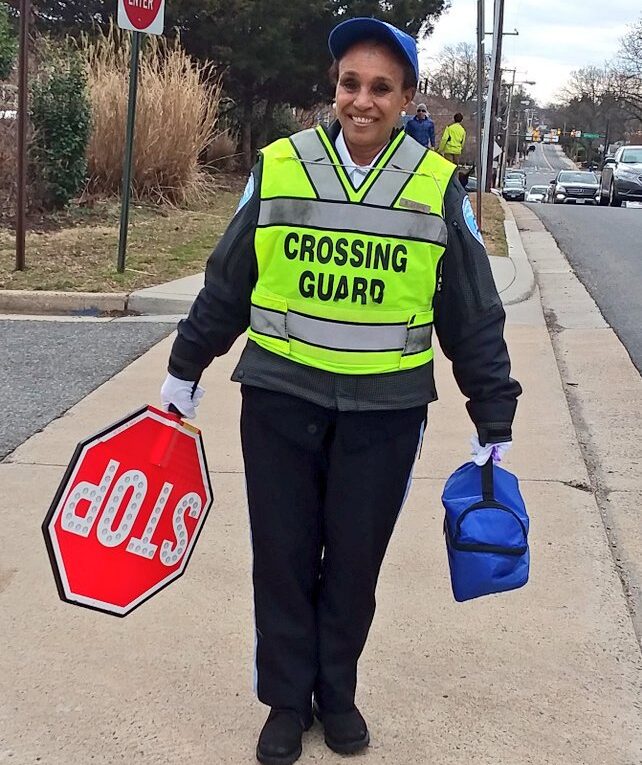 With nearly 20 nominations submitted by Fleet and Long Branch families on her behalf, Gebre is one of six Crossing Guards state-wide to receive the honor for 2021. VA SRTS received more than 170 nominations for 50 different Crossing Guards throughout the Commonwealth this year. Twenty-five of the nominations were submitted by APS students, families and staff on behalf of six guards and the entire Arlington County Police Department (ACPD) Special Operations Crossing Guard Unit. ACPD hires, trains and manages the 22 Crossing Guards who support 36 crossings at 23 APS schools at arrival and dismissal time every day.

Gebre joined ACPD’s Crossing Guard Unit in 2018 and has been a familiar fixture at Long Branch since then.  She happily added her post at Fleet in the 2019-20 school year, shortly after the school opened. Nominations from both schools described Gebre as “caring, polite, upbeat and warm,” as well as “calm, diligent, focused, and super-competent.”

One of the families who submitted a nomination on her behalf called her “the front line of our school for safety.” Another family noted, “She cares about what she does and cares about us too.” Other nominations added:  “She is a very important part of our community,” “ a bright spot in the day,” and “sets the tone for all to emulate,” and “our children are often seen giving her a big hug.” And yet another nomination summed up, “We love her!”

Gebre will be recognized by each school next week as part of APS Crossing Guard Appreciation Week, February 7-11, 2022.  The APS Safe Routes to School program thanks all APS students, staff and families who submitted nominations this year.

Virginia’s Crossing Guard Appreciation Week is a statewide event sponsored by the Virginia Safe Routes to School program each year to recognize and thank Crossing Guards, who help students cross the street safely on their way to and from school every day, as a vital part of the safe routes to school network.