On a cold day on March, student members of the Green Team at Glebe carried out bags of trash from the first floor of the school. The reason for this exercise was to participate in a waste audit to determine how much trash was actually being recycled.

“The Green Team was started because students are really passionate about recycling and lessening garbage at the school,” said teacher Toni Wexler.

In groups, students sorted bags of trash to see how much of it was items that could have been recycled. “Doing a waste audit was really eye-opening because sometimes people think they are recycling, but when you actually dig through the trash, you realize how much doesn’t need to be in there. We really could reduce our footprint a lot,” said Wexler.

Students found that nearly 40% of the trash could have been recycled. Based on these results, the Green Team will focus on better educating the students, teachers, and community about which items should be recycled.

Watch the most recent episode of Green Scene to find out more about Glebe’s wast audit. 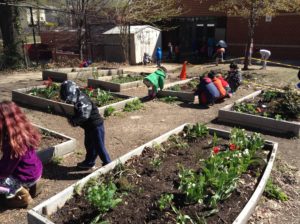 On Fri, April 20, Drew students were encouraged to bring garden plants to be planted on school grounds. The goal is to have a diverse selections of plants that will beautify the gardens and provide students with the opportunity to share their personal Earth Day contributions.The project was coordinated by Montessori teacher Lila Ross.

The Barrett SCA sponsored an Earth Day poetry event where students were encouraged to submit poetry. Each day of the week leading up to Earth Day, four of the poems were read on Tiger TV. Students wore green or blue on the Friday before Earth Day, and were encouraged to participate in the Barrett Beautification/Garden Day on the Saturday before Earth Day. During the school day, students spent time in the Barrett Outdoor Classroom appreciating nature.

Ashlawn Recycling Raiders encouraged their fellow students to Reduce, Reuse and Recycle. In the cafeteria, they monitored each lunch period’s collection of Recycling vs. Landfill Waste, with compost collected separately. They ended the day with five large recycling bags and four landfill waste bags, plus four very full compost buckets.

McKinley’s Amy Iger and her kindergarten class enjoyed Earth Day learning with a nature scavenger hunt and homemade binoculars. In honor of Earth Day, second graders in Kristen Walleck‘s and Jessica Parnell‘s classes visited Potomac Overlook. They discussed different plants and animals found in Virginia and how they change in the seasons. The unpredictable weather tied in perfectly. 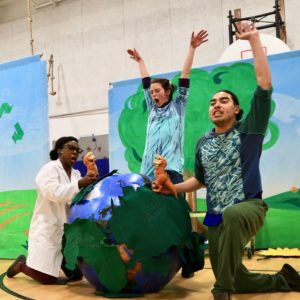 Henry’s Humanities Performance Coordinators Karen Bastow and Barbara Farrell planned with Discovery Theater an assembly on Wed, April 18, entitled “Mother Earth and Me,” to help celebrate Earth Day. The magic of earth science took center stage in this fun, interactive original play, as the characters explored the origins of our planet, the water cycle, and our important role in protecting the ecosystem, as well as folklore about the “big blue marble” we call home. Students participated and kicked off Earth Month by pledging to become an Earth Warrior at the end of the show, and learning some great ways to start right away. 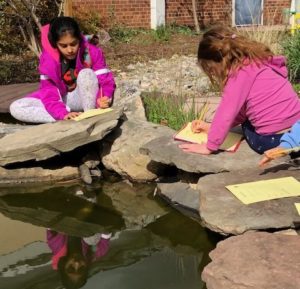 During the week of April 16, ASFS celebrated Earth Day with their annual Habitat Days. Third grade students participated in an Earth Day celebration concert entitled, “Reduce, Reuse, Recycle.” Fourth and fifth graders were invited as audience members to listen to songs like “Ever Green, Ever Blue” and “Look Out for Mother Earth.” Third graders also gave their first musical performance using their recorders. Fourth grade students took part in gardening activities around the grounds of the school to remove overgrowth and weeds and plant new flowers and vegetation for the spring season. Students in grades K-2 students planted vegetables that will be harvested and donated to food banks later in the year. In YES Club, fourth and fifth grade students worked in small groups, brainstorming ways to reduce, reuse and recycle, both at school and in their communities at home. They also created poetry inspired by nature while sitting outside in their school’s central courtyard and outdoor garden. Students in fourth grade also learned about the various physical and behavioral adaptations of owls in the Investigation Station. Students used information found on the internet to learn about the survival adaptations of several different North American Owls. Fourth graders were asked to work in small groups to create poster presentations of the many varieties of owls. They also were given the opportunity to dissect and analyze an owl pellet from the bird itself.