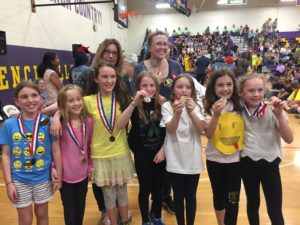 An all-girls engineering team from Glebe Elementary School is heading to the 2018 Odyssey of the Mind World Finals where they will compete with students from nearly 25 countries. The World Finals will be held in Ames, Iowa May 23-26.

The team of fourth graders from Glebe, who are all ages 9 or 10, became state champions last weekend at the Virginia Odyssey of the Mind competition, which was held April 14 in Newport News. The girls took First Place in the “Technical” Problem, Division I, which requires a combination of engineering and creative presentation. This year’s problem was titled “Emoji, Speak for Yourself.”

The girls are the first Glebe Odyssey team to win at the regional competition and the state competition. The Odyssey of the Mind program was brought to Glebe in 2015 and is still relatively new to many parents. 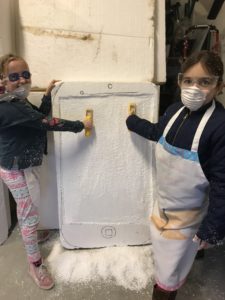 Students chose their problem in October 2017 and will continue to work on their project until the World Finals. They estimate they have spent more than 100 hours meeting, researching, building, brainstorming, and eating lots of Girl Scout cookies.

They designed and constructed two simple “emoji” machines. They also built a texting machine that prints a message as part of their problem solution.

Students utilized 3D Printing, designed graphics in Adobe Illustrator, and composed original music on a computer. They went through a design process, trying and testing prototypes for each aspect of their solution, working with power tools and cutting tools, painting, doing paper mache, and exploring ways to use unique materials, otherwise known as “trash.” They sculpted Styrofoam blocks, discarded from a construction site, to create some props. They designed and 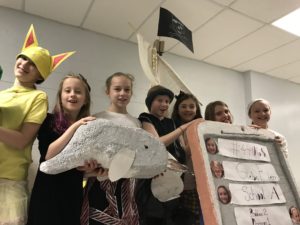 made their own costumes, including an emoji skirt made entirely from toilet paper tubes. They also came up with a creative story plot, telling the story of a forgotten emoji.

One of the more difficult things about their 8-minute presentation was that it had to be performed without any speaking, no words or verbalized sounds, under their rules of their problem. That was especially hard for this group of creative, talkative fourth graders.

In addition to their long-term problem presentation, the Glebe team also participated in and won the “Spontaneous” competition at the state level, within their problem and division. This part of the competition requires a team to give creative answers to a question on the spot. The questions are kept a secret until after the World Finals.