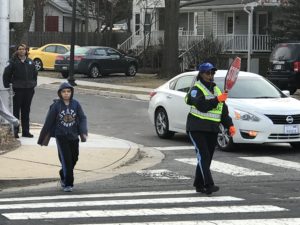 Nominated by a Kenmore family, Abebe is one of six crossing guards state-wide to receive the honor. VA SRTS received over 150 nominations for 76 different crossing guards throughout the Commonwealth this year.

Abebe is the ever-vigilant crossing guard who is at her post on busy Carlin Springs Road before dawn and again at afternoon dismissal every school day, in all weather conditions. According to the nomination, Abebe treats students with “the kind of care and respect that is reflected in the respect students show her as they follow the rules and wait patiently to be crossed.” Known for her strength, awareness, and professionalism, she maintains firm control over the flow of buses, cars, construction vehicles, pedestrians, and occasional

cyclists who travel through her intersection, remaining focused on ensuring the safety of students.

The family who nominated Abebe recalls how, “One day in early September, she saved an over-eager sixth grader from nearly being run over.” According to the student’s parent, “All of the traffic lights surrounding Kenmore were blinking yellow. The police department stationed a cruiser to stop traffic so that the crossing guard would be able to cross the children safely. My child, new to middle school and oblivious to her surroundings, stepped off the curb into oncoming traffic. Ms. Abebe physically lifted her out of the street and back onto the sidewalk. I saw the entire incident from two blocks away, and all I could think until Ms. Abebe got her back onto the sidewalk was ‘My child almost died on her first day walking to middle school.’ I am incredibly thankful.”

“Crossing guards play a key role in keeping our most unpredictable travelers safe as they arrive and depart from school each day. The actions of Ms. Abebe on the first day of school highlight her ability to remain alert at all times and her readiness to act at a moment’s notice to ensure the safety of the students at her crossing. The safe environment she has created gives both students and parents’ peace of mind as they travel throughout the school year. Arlington County is fortunate to have dedicated crossing guards, such as Ms. Abebe, who take pride in the job of safeguarding our students. We are honored that she is receiving this well-deserved recognition for her efforts,” said Arlington County Police Chief Jay Farr. 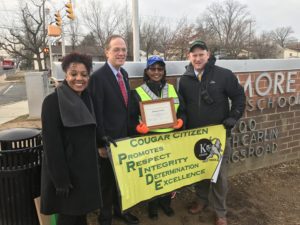 Abebe has been with the crossing guard unit since February 2015. She has been stationed at 3rd Street and S. Carlin Springs Road since she started. She also has a second crossing at Patrick Henry Elementary School.

“We are very proud of Almaz for receiving this recognition,” said Kenmore Principal David McBride. “She makes students feel safe while crossing Carlin Springs Rd. and is the first smile they see as they come to school.”