During the 2018-19 school year, the School Board approved new names for existing and new schools as Arlington Public Schools (APS) prepares to open five new schools in fall 2019. Along with new schools and facilities opening, several programs are moving locations and new elementary boundaries taking effect. Below is a summary of the changes in APS this year. 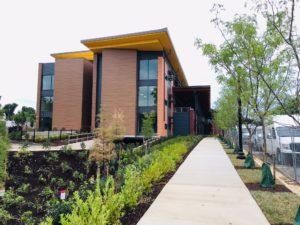 Alice West Fleet Elementary School (115 South Old Glebe Road):
A brand new elementary school is opening next to Thomas Jefferson Middle School this fall. In 2017, the School Board decided that the school would be called the Alice West Fleet Elementary School. In September 2019, the majority of the students currently enrolled at Patrick Henry Elementary will move to new school. As the new elementary boundaries take effect, Fleet will also welcome students from Long Branch and Barcroft, forming a new community.

Dorothy Hamm Middle School (DHMS) (4100 Vacation Lane):
This is Arlington’s newest middle school and will open in the original Stratford building on Vacation Lane that was home to the H-B Woodlawn and Stratford programs. The new name of the school honors an Arlington resident and activist who was one of the plaintiffs in the successful civil suit that was filed in May 1956 to desegregate Virginia schools. The building is undergoing renovations in preparation for opening day and an addition is under construction for an opening in 2020. Opening DHMS as a neighborhood school means fewer buses and more walkers.

Dr. Charles R. Drew Elementary School (3500 South 23rd Street):
Drew Model School is now Dr. Charles R. Drew Elementary School. Drew Model previously housed preschool, lower and upper elementary Montessori classes. The Montessori program is moving to its own location as a standalone school with a new name, and Drew will open in the fall with an updated interior and a new name to represent the change of the school, from a hybrid countywide, neighborhood school, to solely a neighborhood school. The school has received a refresh and minor renovations during the summer to prepare for the new year. 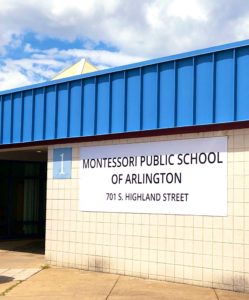 Montessori Public School of Arlington:
APS is opening the first standalone countywide Montessori public school in the Commonwealth of Virginia. The newly named Montessori Public School of Arlington will open in the former Patrick Henry Elementary School building on S. Highland Street by the Career Center. The school is a countywide option school, meaning that admission is by an application and, as needed, lottery process.