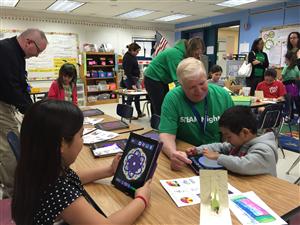 On March 17, 292 students attended Barrett’s S.T.E.A.M Night with their families. The theme of the night was EXPERIMENT! With a grant written by science enrichment teacherSusan Garman, The Children’s Science Center set up 12 different stations for students and their families to explore and learn about many scientific concepts. Other activities included exploring with pitch and sound with music teachers; learning about art; story writing & Twitter Publishing Party; and engineering with student-made cars and a wave tank. Additional photos from the event are available online. 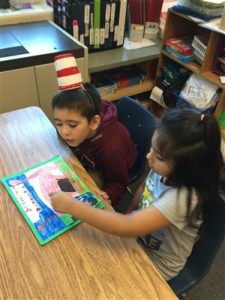 Reading, writing and learning is happening this week in Marijoy Cordero’s first grade class atCarlin Springs. Her students have spent time researching non-fiction topics, then they wrote about it, edited, and made beautiful covers for their books. They followed Dr. Seuss’ idea of books called Class Knows a Lot About That. Upon final revision, these first graders invited the kindergarten classes to come to their room and have a one on one reading of their books. At the end of the session, they gave the kindergarten students some popcorn as a thank you for being such great listeners.

Last week, Williamsburg seventh graders went on an extraordinary expedition — into their own DNA. Dr. Carla Easter, chief of the Education and Community Involvement Branch at the National Human Genome Research Institute (NHGRI), demonstrated some of the incredible scientific breakthroughs being conducted at the National Institutes of Health. Foremost was a discussion about the Human Genome Project, which endeavors to identify and map the entire DNA sequence of the human genome. Students also discussed opportunities for a future career in scientific research, or even “citizen science.” Thank you to Williamsburg parent Sonia Klein for arranging the event.

Local author Wendy Shang visited Patrick Henry on April 5 to speak to fifth graders who were interested in meeting the author of The Way Home Looks Now and The Great Wall of Lucy Lu. This author visit was sponsored by An Open Book Foundation, which is on a mission to connect disadvantaged children in the Washington, D.C. area with authors and books. Each student was provided a signed copy of her books .

Anastasia Weigle lead a presentation on Artist’s Books at H-B Woodlawn. As an established artist, archivist, library director and educator Anastasia is uniquely qualified to introduce her audience to Artist’s Books which is artworks that often uses a book form as a sculptural basis. She described the historical roots of Book Arts and talked about the current trends of this art form. Sample artworks were on display for students and staff. It was a unique and creative special event that was enjoyed by everyone.

On April 6, a team of seven fourth and fifth grade students from Campbell and several from Jamestownattended the Schools Environmental Action Showcase at George Mason University sponsored by Nova Outside. The Campbell group prepared a tri-fold board to share what Campbell does to help the environment and created a Powerpoint and short video to further highlight the school’s environmental successes. The team also decided to interview teachers at Campbell who have inspired them to learn about the environment, and they used what they learned to create a book about their experiences with those teachers. The Jamestown Green Team presented on how they are creating a nature trail at Jamestown for staff and students to utilize.

As part of their IB unit, How We Express Ourselves: The Artist in Me, Randolph kindergarteners have been learning about the famous American painter Jackson Pollock. Through video and class discussion the children explored Pollock’s unique style of drip painting. They also painted their own small Pollock-style paintings which now hang on the walls of the school. Eventually, in typical Pollock style, they went big. Together, the students created a large masterpiece. Setting up on the school yard black top, they used butcher block paper, large paint brushes and tempera paint to create their “Big Drip.” Teachers plan to use the giant painting as a backdrop for the upcoming Kindergarten musical show. The final piece to the project is the Pollock-esque barrel being designed for the George Mason University Operation Rain Barrel contest.

Ladies from DinoRock, a local organization that teachers students about dinosaurs visited Stratford. They were wonderfully entertaining, informative and interactive. Students learned about dinosaurs by singing and dancing.

Never forget to clean your HTML code and double check your content before publishing an article!

From October to March, students in the Gunston Design and Engineering Club worked diligently on creating soapbox derby cars. The club was sponsored and guided by Check-In Supervisor Steve Ellis, P.E. teacherJames Kolody, Tech Ed teacherTopher Paterno, and Minority Achievement Coordinator Monica Lozano. Over the course of six months students worked through a rigorous process of creating their vehicles. Working in teams, students began by designing their cars on paper. Students then learned how to properly use various tools to help them build their vehicles from scratch. Cars were primarily built out of wood but also used metal and other materials. They also designed and built steering and braking systems on their cars. The culminating event for the D&E Club was on April 1 and was called the “Adam Nesbitt Car Show & Race” (named after the late Gunston Tech Ed teacher). At the show, students and staff exhibited their cars and later raced them against one another. Additional photos areavailable online.

Taylor fourth grade students have been preparing for their presentation of the musical, “The Phantom Tollbooth Jr.” The production is a collaboration of music teacher Eleyna Vernon and art teacher Monica Stroik. Vernon is directing two complete casts in four performances where all students have a singing part, individually or in the chorus. The fourth graders designed the t-shirt in Stroik’s art class and have created the props and colorful sets. Some students chose to work as stage hands or run the audio and lighting.

On April 6, Oakridge students, parents, and staff came to school on foot, on bikes, in buses, and even on stilts! PE teachers Joe Papola, Ryan Whitelaw, and Alex Fishbein, along with Assistant Principal Rebecca Irwin-Kennedy and counselor Anne Terwilliger, coordinated the event. Staff met students at various locations in the neighborhood before school and they arrived together. A stand was set up out front where walkers/bikers could collect a metal ring and bead for their backpack. Each Wednesday until the end of the school year when they walk/bike students collect another bead. An outside track was created at school to provide another opportunity to encourage walking. Students who spent recess time walking the track also received a bead.