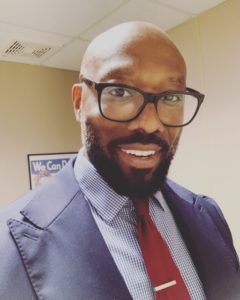 The Board appointed Antonio (Tony) Hall as the new Principal of Washington-Liberty High School. Hall has 20 years of experience in education, including 15 years with Arlington Public Schools. He began his career in APS as an English Teacher at Gunston Middle School, where he worked to increase SOL scores on the Grade 8 Writing Test.

“During the interview process, Tony demonstrated his commitment and belief in connecting with all stakeholders, hearing every voice and supporting every member of the Washington-Liberty community to strengthen the overall sense of community, so that every student knows that they belong at Washington-Liberty,” said Superintendent Dr. Francisco Durán. “Tony brings a wealth of experience, knowledge and familiarity with Washington-Liberty to the role of principal and will continue the Generals’ tradition of success.”

In 2008, Hall was appointed as an assistant principal at Washington-Liberty High School. There, he spent 10 years working with all stakeholders to increase student participation in AP/IB courses, develop social emotional learning/whole child initiatives, such as the Generals’ Period and “The Whole General” sessions, in conjunction with his administrative colleagues. He also assisted in increasing minority student participation in AP English 11 & 12 by 13 percent. In addition, Hall collaborated with Washington-Liberty teachers on efforts in data-driven decision-making as well as professional development sessions related to cultural competence and collaborative learning teams.

Seeking to diversify his instructional leadership, Hall transitioned to the role of assistant principal at Swanson Middle School in 2017. While at Swanson, he worked to change the instructional model to block scheduling and collaborated with Math teachers on targeted interventions, which led to an increase in Grade 6 SOL Math performance. Currently, Hall works with the English and Reading teachers at Swanson to develop interventions and Orton Gillingham rotations designed to increase student reading fluency, decoding, and lexile level.

Hall received his bachelor’s degree in English Literature from Central State University and a Master of Arts Degree in Educational Supervision and Administration from the University of Phoenix. He is currently pursuing a Doctor of Education in Curriculum and Instruction from Liberty University.