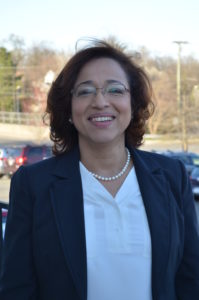 The School Board appointed Marleny Perdomo as the Principal of Key Elementary School at the April 5 meeting. Perdomo is currently an assistant principal at Washington-Lee High School, and will replace Dr. Marjorie Myers, current Key principal who will retire this summer.

“Marleny has a passion for languages, students, and people, and is a talented leader whose greatest strengths are her interpersonal skills and the connections she fosters with everyone she meets,” said Superintendent Dr. Pat Murphy.

A native of Colombia, South America, Perdomo has 24 years of experience in bilingual education. She is fluent in Spanish, English and French and holds a Bachelor’s degree in Education from the Universidad Pedagogica Nacional in Bogotá, Colombia. She also holds a Master’s degree in English from Carthage College in Wisconsin and in International Relations from Ohio University in Ohio. Her teaching endorsements include English as a Second Language (ESOL), Spanish PreK-12 and Elementary Education.

Perdomo joined Arlington Public Schools in 1994 as an ESOL and Immersion Teacher. In 2003, she went on to serve in the Department of Teaching and Learning as an Immersion Specialist and then as World Language Supervisor in 2010. During this time, she was responsible for coordinating the implementation and evaluation of the Spanish Immersion programs at the elementary, middle, and high school levels.

She has developed Spanish curriculum for elementary and middle school programs, and also ensured that secondary students had access year-round to other languages such as Arabic and Chinese. Ultimately, her passion for leading schools and being around students led her to assume the position as assistant principal at Washington-Lee High School, where she has served as the administrator over the HILT and World Language departments.

Over the last few years at Washington-Lee High School, she has also served as the Hispanic Parent Administrator and fostered solid communications with Latino families to increase parent and student engagement through the development of initiatives that promote parent participation.

Her transition plan will focus on three “Key” goals: upholding and continuing the mission and vision of Immersion; maintaining and strengthening relationships with various stakeholders inside and outside of the Key community; and student success as she continues to strive for academic and language proficiency excellence for all students.