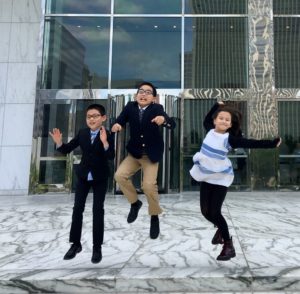 ASFS Students Place First in Stock Market Challenge
If you need some advice investing in the stock market, we would recommend ASFS students Spencer Park, Sachi Mataki, and Matthew Bu who placed first in the Virginia Stock Market Competition. A second team placed in the top 100 teams in Virginia. These students competed against student in grades 4-12 across Virginia. Students were given a fictitious $100,000 to invest in stock, bonds, or mutual funds in the online simulation, which uses the real prices and valuations of investments. The goal of the game is for student-teams to obtain financial literacy and to develop a personal investment strategy that will be successful. The online simulation of the global capital market engages students in grades 4-12 in the world of economics, investing, and personal finance. Teacher Debbie Bulford sponsored the teams. 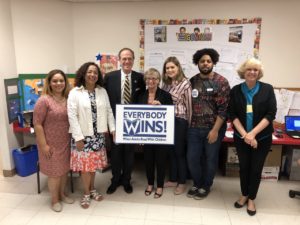 Everybody Wins Wraps up Mentorship Program at Key
Last week, Key celebrated the end of the Everybody Wins mentoring program for this year. Everybody Wins has been partnering at Key for the last 20 years. This year, we were fortunate enough to have 35 students participate and be paired with 50 mentors. Mentors ranged from police officers to accountants and sports managers. Thank you to the Everybody Wins staff as well as our Key teachers and staff for helping the program continue to succeed and flourish. 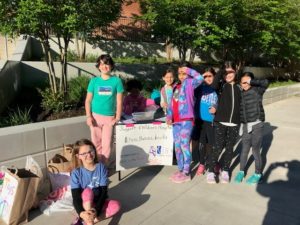 Girls on the Run Hold Collection Drive
The McKinley morning Girls on the Run team were thankful for the entire McKinley community for supporting its Community Impact Project. In only 1-1/2 hours, the girls raised over $300 and collected nearly 100 toys, books, and crafts for the children at Inova Children’s Hospital. 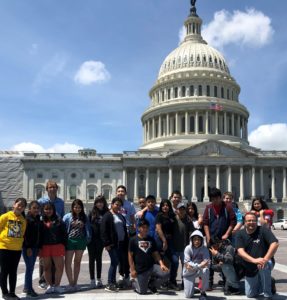 Art, Music & Culinary Talents on Display at ACC
For this year’s final “Off the Pike” at the Career Center’s student run restaurant, many student talents and skills were showcased. The artwork included completed projects from CTE classes such as Auto Body, Cosmetology, and Digital Arts, and the individual creative artwork of our amazing students. There were also live performances from students in the band Background Action, and two rappers. The food was deemed outstanding by many, but even more importantly, Chef Renee Randolph created another fantastic learning experience for their students. The students have successfully learned the back end and front end of running an actual restaurant. 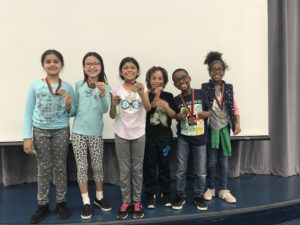 Drew’s Battle of the Books
The Epic Readers, a team of fourth grade students won Drew Model’s 2nd Annual Battle of the Books competition. These reading team champions competed with other third, fourth and fifth grade homeroom reading teams. Student participants read six assigned books for the tournament and completed four rounds of competition. The Classroom Book Battle was round 1. Winning teams from round 1 advanced to the school assembly tournament for rounds 2 – 4. Reading teams answered multiple-choice questions, completed fill in the blanks, and the top two teams wrangled in a final one-on-one bonus round. 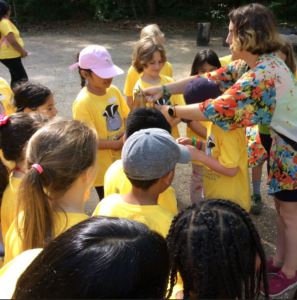 Henry’s Trip to Colonial Williamsburg
Henry fourth graders enjoyed a two-day, overnight Field Trip to Colonial Williamsburg, Jamestown and Yorktown. Students got an opportunity to develop a greater understanding of Virginia’s rich history, from the cultures of its native peoples and the founding of Jamestown to present day. While touring the sites, the students were shown historical context and able to participate in hands-on activities that helped shape part of the story of Virginia. 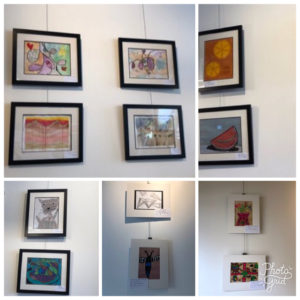 McKinley Art on Display at Local Coffee Shop
The Rare Bird Coffee Shop in Falls Church has given McKinley students the opportunity to have their artwork on display to share McKinley’s artwork with the community.  The artwork is on display through May 19. 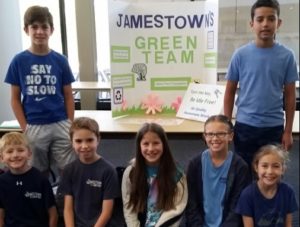 Jamestown’s Green Team in Action
The Green Team students at Jamestown had a great time at the Student Environmental Action Showcase last week at GMU. They shared their project about the effects of idling your vehicles and then participated in hands-on STEAM activities, where students learned about everything from storm water runoff to local flora and fauna. 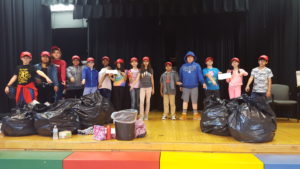 Ashlawn’s Recycling Raiders
Ashlawn‘s fifth grade Recycling Raiders spent Earth Week focused on trash and recycling. On Tuesday, they collected trash from Bluemont Park and realized they were protecting frog and duck habitats along the way. On Friday, they collected the lunchroom recycling and trash from each period and were happy to see more bags of recycling than tras, even if the trash weighed more. Final tally: 6 bags & 32 pounds of Recycling to 4 bags & 95 pounds of trash. 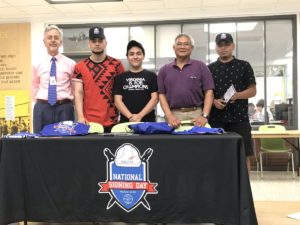 National Signing Day at the Career Center
Earlier this month, three Arlington Career Center students in Manny Sanchez’s Electricity program participated in the SkillsUSA Nationwide Commit to the Skills Trades on National Signing Day. The three Electricity II students are Juan Pedroza-Cruz, Alex Contreras Barrera and Jessy Sanchez Juarez. Two of the students will working with a local electrical company doing residential wiring and one will be an apprentice with the electrical union. The students will be using the skills they learned in the electricity classes when they graduate and continue to build on that foundation in the coming years. The goal is to become a master electrician as they are earning and learning on the job and participating in additional classes and passing industry tests. The National Signing Day program is to bring awareness to the skills trades careers and to help close the US skills gap. Klein Tools is the sponsor and provided the hats, shirts, and starter tools for the students.