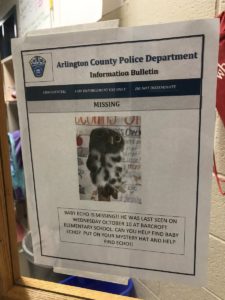 Barcroft third graders had a mystery on their hands this week. Where did Baby Echo go? Luckily, the Arlington County Police Department, SRO Officer Geoff Gammell and the third graders where on the case. Baby Echo is a small stuffed Owl used during reading lessons and it went missing Wednesday afternoon. In a morning announcement, Principal Judy Apolstolico-Buck announced that Baby Echo has gone missing. Office Gammell set up crime scenes using police tape and created an authentic missing person flyer with a photo of Baby Echo that was placed throughout the school. This is the end of their mystery unit where third graders have studied and read mystery books. Their teachers wanted to have them apply all the skills they learned in reading to a real life mystery by stepping into the shoes of detectives; identifying the mystery, collecting clues, growing theories, and applying those skills. Follow the hashtag #FindBabyEcho to see where students found Baby Echo.

A Perfect Morning for Walking and Biking to School 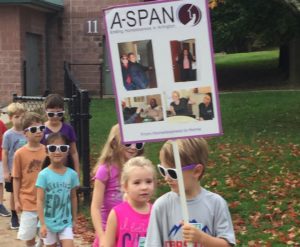 Nottingham Walks to Support the Homeless

On Wed, Oct. 10, Nottingham students and staff walked in the 2018 Walkathon. Each grade walked together around the block after raising money to support the end of homelessness in Arlington. Thanks to all the staff and families who stood along our walk and cheered everyone on. 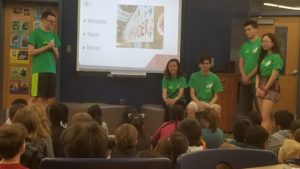 What’s your greatest success story when you stopped someone from bullying?  When do you see bullying the most? How long have you been an Upstander? Why did you become an Upstander? How do we stop bullying?  These are questions Campbell students were able to ask and have answered when they attended an anti-bullying presentation led by Wakefield High School’s Upstanders.   This powerful and important discussion between elementary and high school students made possible by Wakefield teacher Veronica Covarrubias and Campbell’s guidance counselor Kate Sullivan. 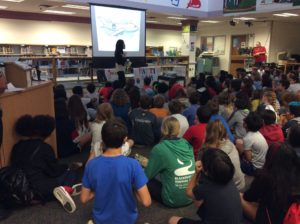 Swanson, through the support of Horray For Books, hosted author and APS alum Patti Kim earlier this week. Her third book, a middle grade novel titled I’m Ok was released on Tuesday and Swanson was her first stop on her book tour. She told the audience of sixth, seventh and eighth graders gathered in the library about immigrating to America at age four from Korea and how her family settled right here in Arlington. Kim also attended Barrett for kindergarten and first grade. Then she explained how her college path led her to a life as a writer. She ended the 40 minutes together by reading aloud from her newest novel. Swanson students returned to class inspired to keep writing their stories after meeting this APS alum published writer. 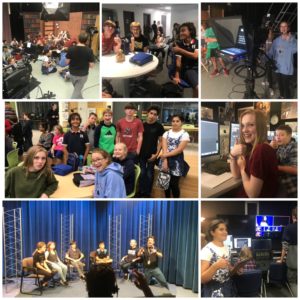 Arlington middle schoolers were treated to a day of film making at the Arlington Career Center at the end of September. More than 60 students from Williamsburg, Kenmore, Gunston, Jefferson, and Swanson were selected for the exclusive opportunity. The event was conceived as a collaboration between film and journalism teachers from throughout APS.  It had the two-fold intention of creating excitement about film making and introducing students to all facets of the creative process. Participants progressed through a series of three workshops, including:  pre-production, (led by Josh Rosenblum from H-B Woodlawn), on-set production (led by Tom O’Day from the Arlington Career Center), and post-production (led by Nathan Bynum from Arlington Independent Media [AIM]).  Additionally, high school filmmakers served as mentors throughout the day, modeling advanced techniques as part of the instruction. Organizers hope to conduct additional film making activities throughout the year—for students in high school, middle school, and elementary school—all leading up to the annual Arlington Film Fest in June. 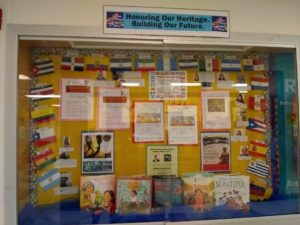 In honor of Hispanic Heritage month, Hoffman-Boston’s teachers Giorgina Palomino, Martha Marquez, Katherine Garcia-Larner and parent Patty Gallardo Kaine created a bulletin board recognizing the different staff members who have Latino/Hispanic roots. On HBTV, Hoffman-Boston’s student run TV production studio, students learned about a famous person from each of the 19 countries thanks to Renee Shaw, Hoffman-Boston’s Communication Arts Specialist. As a culminating activity, teachers from PreK to fifth grade each read aloud a different fictional book in which the author and the characters were of Latino/Hispanic origin. 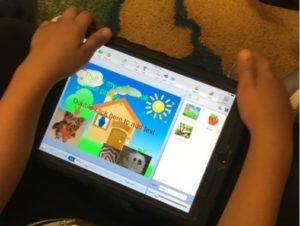 At Ashlawn, Katherine Leon taught second grade classrooms how to use Wixie, an online authoring tools that allows students to combine images, audio and text. Digital storytelling is a great way for students to create and publish their own stories. On Wixie, they can create informational text, narrative writing, opinion pieces, adapting pattern stories and writing how-to books. 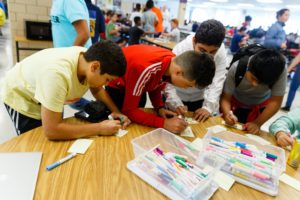 During the first week of October, Gunston students recognized Bully Prevention Month with activities under the theme of “Stomp Out Bullying” designed by the Counseling department. Students wrote words of kindness and positivity to be posted in the cafeteria. Students were also challenged to sit with someone new during lunch to make a new friend. 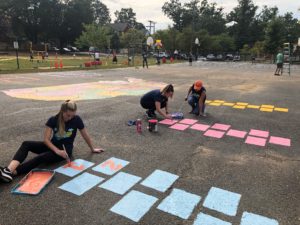 On Oct. 2, employees from Hanover Research spent a day completing acts of community service around the ASFS campus. Employees repainted hop-scotch and four square play areas on the black top and sanded and upgraded the benches and hand rails near the playgroup equipment. The day of service coincided with the Hanover’s week of Service during the month of October. The entire ASFS community was grateful for the fresh coat of paint and the strong effort and support from the Hanover team. 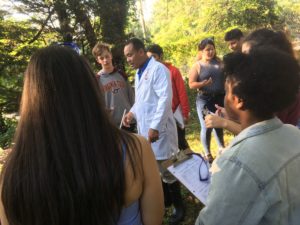 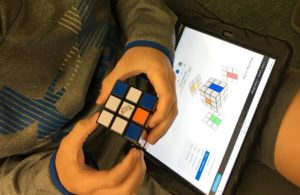 Jefferson Resource Teacher for the Gifted Megan Detweiler is encouraging students to explore and create products based on their interests during “genius hour.” Their beginning how-to projects include learning to code video games, solving a Rubik’s cube, and improvements in portrait drawing. 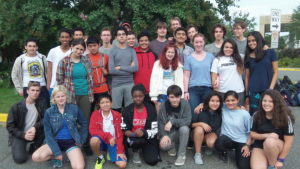 Season two for the Career Center boys’ Ultimate team is underway. Coach David Adams is back with twice as many players as last year. His team is building a tradition of fun and sportsmanship at the Career Center under the leadership of Captain Emilio Tognelli. Additionally this year, the Career Center’s first-ever girls’ Ultimate team is taking the field. Under the leadership of Co-Captains Sheereen Khan and Alaysia Prear, the “mighty ten” are a testament to how sports help empower young women. Ultimate is a fast, fun, action-packed sport that coined the term “spirit of the game” to describe a high level of competitive play evident with self-officiating, mutual respect among players, and the basic joy of play. 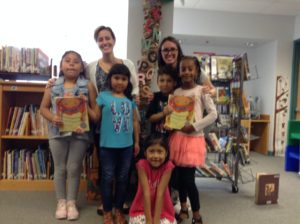 This annual event exposes students to Hispanic culture through books. Library guest read various picture and biography bestsellers. Extraordinary connections were made with two books in particular. First, Marisol McDonald No Combina (Marisol McDonald Doesn’t Match). This bilingual book was read by two APS employees. The students loved it. Spanish speaking students were engaged and it was a treat for them to hear a story in a familiar language. After reading Mango, Abulea, and Me, our APS guest reader spoke with Drew students about her childhood in Puerto Rico. Connections were made when she explained her elementary school experiences. This conversation sparked a great deal of interest among students who learned about another culture. 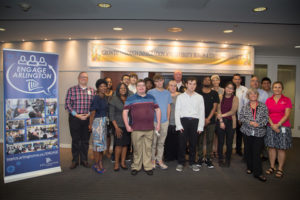 Students from the Program for Employment Preparedness (PEP) explored different careers earlier this month as part of National Disability Employment Awareness Month. Students were paired with mentors from Arlington County where they had the opportunity for a hands on introductory experience to careers ranging from firefighting to zoning; from human resources to video production. 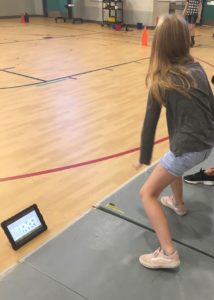 The PE teachers at Jamestown are using technology to enhance their lessons. Third graders are using their iPads as they complete different fitness stations. 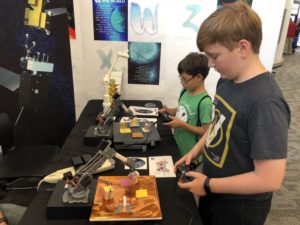 The Lego Robotics team at ASFS celebrated NASA’s 60th anniversary with a trip to the Goddard Space Flight Center in Greenbelt. The team, led by ASFS Science teacher Stephanie Lin took a tour of the Spacecraft Integration and Test Facility. While there they also learned about robotics in space, and made models of pulsars. The Lego Robotics team at ASFS meets weekly during the year and takes part in various competitions in the region annually.