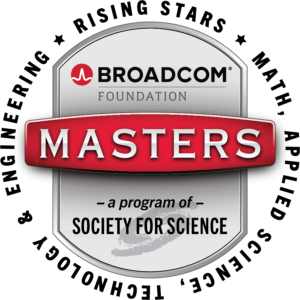 Swanson Middle School eighth grade student Henry Stievater has been named one of the Top 300 MASTERS in the 2021 Broadcom MASTERS® for his project titled The Effect of School Size, Per-Pupil Expenditures, and Percent of Teachers with Advanced Degrees on SOL Pass Rates. Stievater is among a select group of 300 MASTERS named from 1,841 entrants throughout the United States. This is the 10th year of the Broadcom MASTERS® — the nation’s premier Science, Technology, Engineering and Math (STEM) competition for middle school students.

The Broadcom MASTERS, a program of the Society for Science, seeks to inspire young scientists, engineers and innovators to solve the grand challenges of the 21st century. Each of the Top 300 MASTERS will receive a $125 award STEM award from the Department of Defense.

The Top 300 MASTERS were selected from 1,841 students from 48 states, Washington, DC and three US territories (Puerto Rico, Guam and Virgin Islands) applying to be a Broadcom MASTER. Only students who are named in the top 10% of their science fair are eligible to enter the Broadcom MASTERS, which is the only middle school STEM competition that leverages Society-affiliated science fairs as a critical component of the STEM talent pipeline.

In recognition of the essential role of teachers to motivate and educate these remarkable young scientists and engineers, Stievater’s teacher Courtney Seavolt will receive several prizes, including a one-year digital subscription to Science News magazine for her classroom, and a special edition booklet of Science News for Students Invention and Innovation articles courtesy of The Lemelson Foundation.

Founded in April 2009, the Broadcom Foundation is a nonprofit corporation with its main mission to advance science, technology, engineering and math (STEM) education by funding research, recognizing scholarship and increasing opportunity.

The foundation inspires young people to pursue careers in STEM through its signature programs, the Broadcom MASTERS® and the Broadcom MASTERS® International, premier science and engineering competitions for middle school students around the United States and the world. Learn more at www.broadcomfoundation.org/masters.