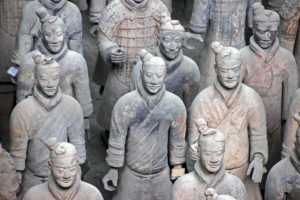 In November, Governor Terry McAuliffe announced that K-12 teachers in Virginia can receive free admission to Terracotta Army: Legacy of the First Emperor of China, a highly anticipated exhibition that opened at the Virginia Museum of Fine Arts on November 18.

This special benefit ensures that you have an opportunity to view this must-see story of the First Emperor’s profound influence on Chinese history, art, and culture. Terracotta Army showcases 130 works of art, drawn from the collections of 14 art museums and archaeological institutes across Shaanxi Province in China. The exhibition tells how the Qin state developed into an empire under Ying Zheng (259–210 BC), who unified China and declared himself Qin Shihuang, or the First Emperor of Qin. His quest for immortality began soon after he became the king of Qin. Highlights include 10 life-size terracotta figures—including warriors and a cavalry horse—that belonged to an underground army of life-size sculptures created by order of the First Emperor to accompany him to the afterlife. The terracotta army was not discovered until 1974, when farmers found pottery shards and bronze arrows while digging a well. Subsequent excavations led to the astonishing discovery of an estimated 8,000 terracotta figures buried in three pits east of the First Emperor’s tomb mound.

This is a once-in-a-lifetime opportunity for you to experience one of the greatest archaeological finds of the 20th century—which VMFA is bringing to the heart of the Commonwealth. The exhibition will be on view through March 11, 2018.

Although admission to VMFA’s permanent collection is free every day of the year, some special exhibitions, such as Terracotta Army, require a fee. To claim your free ticket (one per teacher), you must present your identification card at VMFA’s Visitor Services desk. Your family members will get half off exhibition tickets, or $10 for adults; $8 for seniors; and $5 for children. Regular ticket prices for Terracotta Army are $20 for adults, $16 for seniors, and $10 for college students and children ages 7–17. You can reserve tickets by phone at 804-340-1405.

As part of this special offer, you can also present your ID card for discounts on dining and shopping at VMFA: a 20 percent discount on purchases in Best Café and the VMFA Shop, and a 10 percent discount at Amuse restaurant until March 11, 2018.

This exhibition is also important for Virginia families, as ancient Chinese history is incorporated throughout the state’s educational curriculum. Dig It!, an interactive exhibition in VMFA’s Memorial Foundation for Children Teaching Gallery, complements the Terracotta Army exhibition and offers visitors of all ages the opportunity to explore the field of archaeology through the use of augmented reality. Focusing on discovery, excavation, and lab study, Dig It! encourages visitors to uncover objects in VMFA’s permanent collection through a virtual dig and learn more about their date, function, and how archaeology contributes to the study of objects from ancient China.

About Terracotta Army: Legacy of the First Emperor of China
Presented in three sections, Terracotta Army: Legacy of the First Emperor of China will explore the rise of the First Emperor, the history of the Qin state, and the emperor’s quest for immortality. The exhibition will feature arms and armor, horse and chariot fittings, ritual bronze vessels, works in gold and silver, jade ornaments, precious jewelry, ceramics, and architectural components that were excavated from Emperor Qin Shihuang’s mausoleum, as well as aristocratic, commoner, and nomadic tombs. Dating from the Zhou dynasty (1046–256 BC) through the Qin dynasty (221–206 BC), these objects reflect the complex history, myths, and burial customs of ancient China.

The exhibition is organized by VMFA and the Cincinnati Art Museum, in partnership with Shaanxi Provincial Cultural Relics Bureau, Shaanxi History Museum (Shaanxi Cultural Heritage Promotion Center), and Emperor Qin Shihuang’s Mausoleum Site Museum of the People’s Republic of China. The exhibition is curated by Li Jian, VMFA’s E. Rhodes and Leona B. Carpenter Curator of East Asian Art, and Hou-mei Sung, Curator of Asian Art at the Cincinnati Art Museum, where the exhibition will travel after it closes at VMFA.

For additional information about Terracotta Army: Legacy of the First Emperor of China, click here.