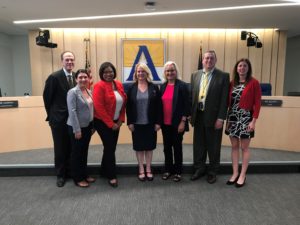 Wakefield High School French teacher Katy Wheelock was nominated for and received The French Order of the Academic Palms through the Government of France. Wheelock was awarded the grade of chevalier (knight). The Education Attaché from the Embassy of France, Karl Cogard, presented the medal to Wheelock at a ceremony on April 5.

Napoleon I first created the palmes académiques as an honorary title to recognize members of the University in 1808. The academic palms became a decoration in 1866, under Napoléon III, at which time the honor was also extended to non-teaching persons who had rendered illustrious service to French education. Thus, the academic palms is the oldest non-military French decoration.

By decree of Président René Coty, the Order of the Academic Palms was instituted in 1955 as the first of ministerial orders recognized by the French Republic and was defined by three ranks: Chevalier (Knight), Officier (Officer), and Commandeur (Commander).

In addition, both foreigners and French living abroad who contribute actively to the expansion of French education and culture in the world may also be recognized. To be named a chevalier, one must be 35 years of age. For promotion to the rank of Officier or Commandeur, except by rare exception, five years must have elapsed between ranks. However, promotion is not automatic.

In the United States, dossiers for nominations and promotions are typically prepared by the French Consulates and forwarded to and reviewed by the French Embassy before being transmitted to the Ministry of the French National Education in Paris, which makes the final decision on French and foreign recipients. Nominations and promotions, by decree of the Prime Minister and upon proposal by the Minister of the French National Education, occur twice a year: January 1 and July 14.