Thousands of APS students regularly walk and bike to school with assistance from the 25+ Crossing Guards who make up the Arlington County Police Department Crossing Guard Unit. Most guards cover more than one school at both arrival and dismissal time each day. In addition to helping students who walk and bike, Arlington’s Crossing Guards also help ensure that school bus riders arrive at school safely.

Crossing Guards do their job every school day, in all weather conditions. With shorter daylight hours, cold temperatures and sometimes treacherous conditions, February can be one of the toughest times on the job for Crossing Guards. Crossing Guard Appreciation Week is a way to remind them how much we appreciate and value their service every day.

Find a Way to Celebrate in February

APS encourages students, families, and schools to recognize these committed individuals during Crossing Guard Appreciation Week. Here are some ideas: 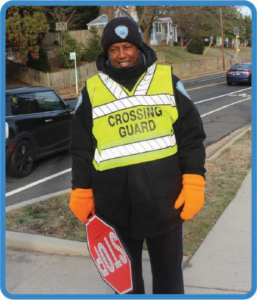 For the fourth consecutive year, an Arlington crossing guard has been named Most Outstanding Crossing Guard. The Virginia Dept. of Transportation selected Taylor Elementary’s Zeleke Taffesse from among 70 crossing guards and 300 nominations received throughout the state.

“Mr. Z,” as he is known, is a positive role model, who received over 30 nominations from the Taylor Elementary School community and also serves nearby Dorothy Hamm Middle School. Read more about Mr. Z and his fellow honorees here.

Thank you for joining APS in celebrating our Crossing Guards — in February and all year long!

If anyone you know is interested in becoming a Crossing Guard, the Arlington County Police Department is hiring and would love to hear from you!  APPLY TODAY! 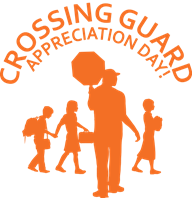 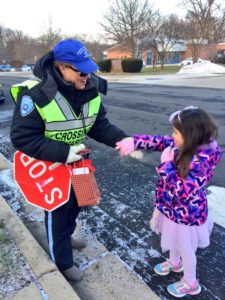 Jamestown Elementary School Crossing Guard Kathy Patterson has been recognized by the Virginia Department of Transportation’s Safe Routes to School (VA SRTS) program as one of Virginia’s Most Outstanding Crossing Guards for 2018-19.

Nominated by multiple Jamestown families, Patterson is one of six Crossing Guards state-wide to receive the honor for 2018-19.  VA SRTS received nearly 200 nominations for 72 different crossing guards throughout the Commonwealth this year.

The recognition is part of Crossing Guard Appreciation Week, an annual Safe Routes to School celebration recognizing Crossing Guards for the critical role they play in the safe routes to school network.

MEET KATHY:  Check out this fun video, Chapter #6 of Arlington’s Car-Free Diet Stories, which introduces you to Kathy — and a few members of her Jamestown/APS fan club! 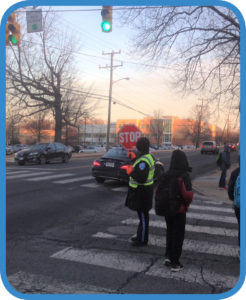 Kenmore Middle School crossing guard Almaz Abebe has been recognized by the Virginia Department of Transportation’s Safe Routes to School (VA SRTS) program as one of Virginia’s Most Outstanding Crossing Guards for the 2017-18 school year. VA SRTS received over 150 nominations for 76 different crossing guards throughout the Commonwealth this year. Abebe is one of six crossing guards state-wide to be recognized as one of Virginia’s Most Outstanding. The honor is part of Crossing Guard Appreciation Week, an annual VA SRTS celebration recognizing Crossing Guards for the critical role they play in the safe routes to school network.

Nominated by a Kenmore family, Abebe is the ever-vigilant crossing guard who is at her post on busy Carlin Springs Road before dawn and again at afternoon dismissal every school day, in all weather conditions. Known for her strength, awareness, and professionalism, she maintains firm control over the flow of buses, cars, construction vehicles, pedestrians, and occasional cyclists who travel through her intersection, remaining focused on ensuring student safety.

The family who nominated Abebe recalls how, “One day in early September, she saved an over-eager sixth grader from nearly being run over.” According to the student’s parent, “All of the traffic lights surrounding Kenmore were blinking yellow. The police department stationed a cruiser to stop traffic so that the crossing guard would be able to cross the children safely. My child, new to middle school and oblivious to her surroundings, stepped off the curb into oncoming traffic. Ms. Abebe physically lifted her out of the street and back onto the sidewalk. I saw the entire incident from two blocks away, and all I could think until Ms. Abebe got her back onto the sidewalk was ‘My child almost died on her first day walking to middle school.’ I am incredibly thankful.”

Abebe has been with the crossing guard unit since February 2015. She has been stationed at 3rd Street and S. Carlin Springs Road since she started. She also has a second crossing at Patrick Henry Elementary School. “We are very proud of Almaz for receiving this recognition,” said Kenmore Principal David McBride. “She makes students feel safe while crossing Carlin Springs Rd., and hers is the first smile they see as they come to school.” 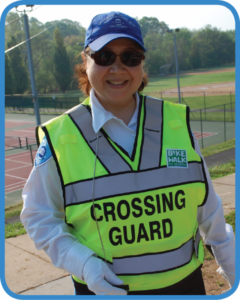 Hernandez, who was nominated by Ashlawn parents, is one of six crossing guards to receive the honor. Hernandez is the ever smiling crossing guard at Ashlawn who is present rain, snow, or shine. She is described by those who nominated her as cheerful and caring, always taking the time to explain to kids the importance of pedestrian safety. Hernandez is known to have a firm control over the flow of buses, cars, construction vehicles, bikers, and pedestrians who travel through her intersection, working patiently but firmly to ensure the safety of students. If you are being unsafe, you are sure to hear her whistle!

One parent who nominated Hernandez claimed that, “everyone is secretly glad when one has to wait by her side for traffic to pass because Ana brings instant sun into your life, no matter the actual weather.” The same parent went on to say that, “after 20 years of walking this route (between my own children attending and now as Ashlawn staff), I can say no other crossing guard comes close to the cheerful, skilled, and gracious Ana Hernandez!”

“Each school day, our crossing guards are out in the community creating a safe environment for children to walk and bike to school. Ana consistently goes above and beyond by teaching children the importance of pedestrian safety. Her dedication to the well being of students embodies the spirit of the crossing guard program and we are pleased she is receiving recognition for her tireless efforts” said Chief of Police Jay Farr.

Hernandez has been with the crossing guard unit since August 2014. She has been at Ashlawn at N. 8th St. and Manchester St. since she started. She also has a second crossing at Barrett Elementary School.

“Ana is amazing at what she does and how she interacts with our students and our community,” said Ashlawn Principal Judy Apostolico-Buck. “She is energetic and is always happy. I want to congratulate her on this honor.”

Hernandez was recognized by the Arlington County Police Department and the Ashlawn community on Crossing Guard Appreciation Day, Wednesday, February 8, 2017.

Crossing Guard Appreciation Day is a statewide event sponsored by the Virginia Safe Routes to School program as a way of saying thank you to those who help students cross the street safely on their way to and from school every day.