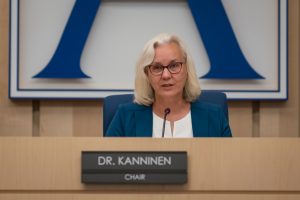 Barbara Kanninen began her service on the Arlington School Board in 2015 and has served as both Chair (2017-18 and 2021-22) and Vice-Chair (2016-17 and 2020-21) of the Board. Throughout her tenure, Barbara has focused on expanding opportunities and supports for all students, staff compensation, positive, constructive community engagement, and financial and environmental sustainability. Barbara is former Chair of the Northeastern Regional Chair of the Virginia School Boards Association and has served on a number of state-wide boards and commissions, including the Virginia Governor’s Commission on STEM Education, Virginia Department of Education Stakeholder Work Group to Support Transgender Students in Public Schools, and Task Force on Students and Schools in Challenging Environments. Barbara has been honored with a number of awards for her advocacy and commitment to students and educators, including the Arlington Education Association’s “Friend of Education” award, AGLA’s Equality award, and Washingtonian magazine’s Most Powerful Women in Washington.

After earning her Ph.D. in Natural Resource Economics from the University of California at Berkeley, Barbara Kanninen began her career as an assistant professor at the University of Minnesota’s Hubert H. Humphrey School of Public Affairs, where she was affiliated with the Center for Transportation Studies and the Minnesota Extension Service. During this time, Barbara taught environmental policy and ecological economics and published in a wide range of peer-reviewed academic journals, including Land Economics, Journal of Environmental Economics and Management, Transportation Research, and Science. Barbara was the recipient of Resources for the Future’s prestigious Gilbert F. White Fellowship and, later, served as a senior economist at NOAA. More recently, Barbara served on the team of experts assessing the damages from the BP Oil Spill and has conducted research addressing Hawaiian coral reef restoration, visibility in National Parks, and the ecological impacts of dam reclamations in the west. In 2009, Barbara was awarded the Publication of Enduring Quality by the American Agricultural and Applied Economics Association.

In addition to her academic publishing, Barbara is an accomplished children’s author. Her latest picture book, Circle Rolls, was reviewed by the New York Times and was deemed a “delightful sneak-lesson in geometry [and] physics.”

Barbara and her husband, Kevin Wolf, have lived in Arlington, Virginia, for almost 30 years and have two sons, Fred and Markus, who were both K-12 Arlington Public Schools students. Fred attended Penn State University and currently works as a civil engineer. Markus just graduated from Virginia Commonwealth University with a degree in Math. Barbara is a founding board member of the Youth Ultimate League of Arlington and a member of Eco-Action, Arlington Historical Society, Columbia Pike Revitalization Organization, Arlington Committee of 100, Friends of the Arlington Public Library, and the NAACP.